Bottom trawls are so intrinsically damaging to coral reefs and deep-sea habitats because of the weight and force at which they are dragged over the seabed. Indeed the effect of bottom trawling on structurally complex seabed habitats has been likened to clear-cutting forests on land. Modern bottom trawling fishing vessels are available in many different sizes, with the largest moving into ever deeper waters. The vessel drags a large cone shaped net which is held open by a solid beam or large trawl doors. These are often made of steel. On larger trawlers these doors can weigh as much as six tonnes and sometimes drag on the sea floor. The force of water pressure against the doors keeps the net open, allowing the heavy chains and rollers to stay close to the sea floor. Often the base of the trawl is reinforced further to prevent it snagging and tearing on rough ground but in the process such 'rock-hopper' equipment can physically damage the seabed. 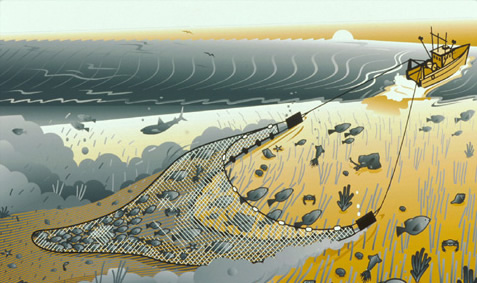 The global catch of marine fish is big business, in 2001, the estimated value was $75 billion USD. Bottom trawling fishing does not represent a large component of that catch, and is unlikely to exceed $300-400 million USD annually (0.4%).