Secret love between corals and worms 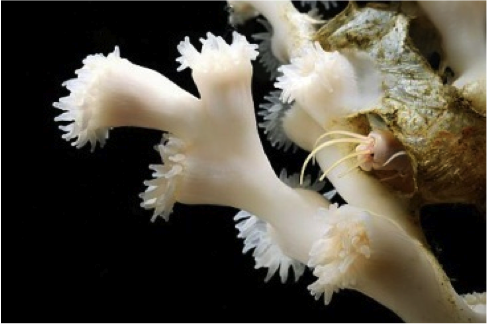 A new study has found that the relationship between a cold-water coral and a worm is beneficial for both partners involved.  The worm can enhance its food uptake by stealing from its host coral, the coral increases the build up of its skeleton without a substantial increase in metabolic costs. This unexpected finding was recently published in an article by Christina Mueller of the Royal Netherlands Institute for Sea Research (NIOZ).

Cold-water corals live in the cold ocean, at depths between 40 and >2000 meters,unlike the better known tropical corals, that grow in warm and shallow waters. Cold-water corals are hardly known, but their reefs are hotspots of biodiversity in the deep sea. Cold-water corals like Lophelia pertusa form extensive reefs on the deep seafloor. The worm Eunice norvegica lives closely associated with the corals, but until recently, it was unclear what this association entails.

Mueller and colleagues found that the worm can enhance its food uptake by stealing from its host coral. The coral does however not suffer from that since it can feed on a broad range of food. When the worm steals from the coral, the coral increases its feeding on smaller particles, which are less interesting to the worm. Furthermore, in the presence of the worm, the coral increases the building up of its skeleton (calcification). Interestingly this however did not result in a significant increase in the energetic costs as indicated by constant respiration. In consequence, the relationship is beneficial for both partners involved.

Worms and corals were placed together or alone in aquaria and fed with two different food sources.  Mueller and colleagues could trace the food with a chemical marker and thereby tested how much of the food was used for tissue growth and how much was respired by both animals. They also checked if there was a difference when they were kept together or alone. In case of the coral they also determined how much of the food was used for building up the coral skeleton (calcification) with and without the worm present.

This study showed that species interaction can influence ecosystem functioning and are essential to understand the ecosystem. The reef is not a “coral-only” reef, it is also characterized by the interactions between different organisms that make it so rich and determine its function. The presence of the worm can facilitate reef growth and framework strength and thus can enhance ecosystem development and persistence. These species interactions therefore might also make a difference when it comes to predictions about the future of cold-water coral reefs, considering changing environmental conditions. This unique ecosystem is already under thread due to climate change, including ocean warming and ocean acidification.

The research was part of the PhD project (CALMARO) which was funded by the European Community’s Seventh Framework Programme. The experiments took place at the Sven Loren Centre for Marine Sciences-Tjärnö, at the University of Gothenborg, Sweden in summer 2010.

For more information, see the full article at Plos One.

Thanks to Christina and Dick van Oevelen from NIOZ, The Royal Netherlands Institute for Sea Research, for this news story. Image courtesy of Solvin Zankl.